Perusing a number of papers on military simulation at Riverview AI, I came across one by David Ezra Sidran and Ralph E. Sharp, III on “MOG93: A Case Study of a New Approach to a Web-based MOUT Simulation.” MOG93, which is playable online here, “is a simulation of the events that took place in Mogadishu, Somalia on October 3, 1993. On that date Task Force Ranger was assigned the mission of capturing leaders of Mohamed Farrah Aididís Habr Gidr clan, which controlled the city.”

MOG93 is not a war game. There is no way to win the game any more than there is a way to win a spreadsheet analysis of a supply and demand curve. Simulations employ various models in an attempt to accurately recreate historic or future events and allow the user to manipulate the variables and observe the outcome.

The simple Java- and HTML-based simulation was developed for the wargamer.com website just before the release of the movie Black Hawk Down.

In MOG 93, movement or other actions by US military forces generate “provocation points”, which in turn cause  the “hostility level” of Mogadishu to rise—thereby increasing the risk of friendly casualties. 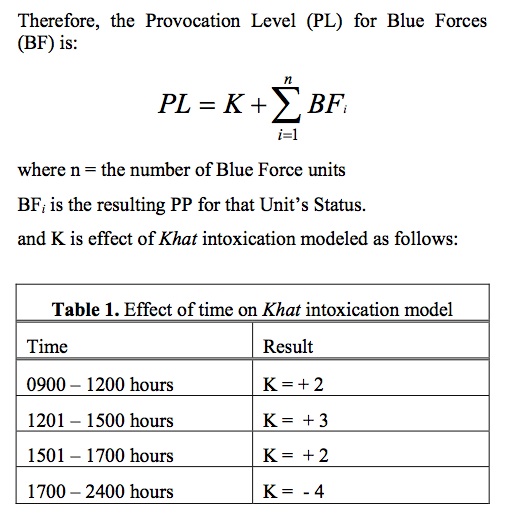 The hostility level of the city is also affected by the amphetamine-like effects associated with the use of qat leaves by local militias. These, moreover, vary with time, reflecting consumption patterns and their associated psychological and physical effects: “At approximately 1500 hours they were in a frenzied state; however their efficiency dropped off sharply after this time as they began to crash from their daytime high. Operations taking place in Mogadishu before 1500 hours incur greater casualties.”