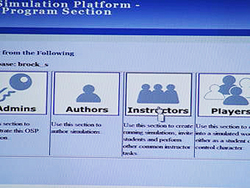 Skip Cole at the United States Institute of Peace has provided an update on the latest development regarding USIP’s Open Simulation Platform:

Already this year we have done a second round of play testing on the simulation “Palmyra.” Some great conversations and ideas were generated by the play testers. I am going to go ahead and set up a ‘playtesting’ email account so that people not actually involved in future  play tests can listen in.

Also, a USIP OSP simulation was conducted done at Virginia Tech! The USIP OSP was used to provide over 30 students and faculty their background and role information.

If you have any functionality that you want to see in this release, please send an email to osp@usip.org

The Peaceconferencing process continues to grow and get more adherents. I have no doubt that soon it will be conducted at High Schools, Colleges and Universities all over the world. [Below] is memo from the creator of Peaceconferencing, Kristen Druker, on its current status:

The beginning of 2011 brings Peaceconferencing a project based learning simulation based on world conflicts closer to its goal of creating an access free website for global youth.  Thanks to the United States Institute of Peace Open Simulation Platform, students in diverse learning communities are using Pea

ceconferencing and its technology interface to see global events as challenges with multiple perspectives and opportunities for positive change.  Students at the Bishop’s School, a private school in La Jolla, CA, where Peaceconferencing originated have organized into peace building teams to problem solve conflicts in Cote d”Ivoire, Sudan, Afghanistan, Israel – Palestine, and North Korea this Spring.  Students at Culver City High School, a public school in Los Angeles County will begin Peaceconferencing in February, focusing on the Israeli-Palestinian conflict, while students at Montessori International College in Buderim, Queensland, Australia will begin new peace rounds in September – October.

The future looks bright for us, and we want to share that. And If you know anyone interested in helping us code, document, or in any way make the USIP OSP a better tool, please do send them our way!