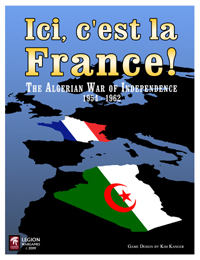 The Algerian war of independence was, in many ways, an apparent paradox that highlighted the political fundamentals of colonial counterinsurgency. On the one hand, from a narrow military standpoint, France achieved something of a bloody victory over the forces of the Front de Libération Nationale. On the other hand, they did so at a such political cost (among both the native Algerian population and French citizens back home) that Paris was ultimately forced to end its control over the territory and grant independence. Today, there are many parallels (as well as quite a few differences) with contemporary COIN and stabilization operations, which makes Ici, c’est la France an obvious choice for our review series here in PaxSims.

My playtest partner this time around, appropriately enough, was a doctoral student specializing in French-Algerian relations, about to leave for several months of fieldwork in Algeria. While she certainly can claim to be a subject matter expert on the topic, she’s not a regular hobby gamer, which provided an opportunity to see whether the complexity of a standard wargame might prove too much for a very knowledgeable novice. 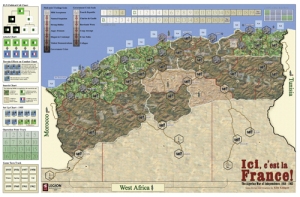 The game covers the entire period of the Algerian war, with each turn corresponding to three months. The attractive mapboard depicts all of the major towns, cities, and administrative regions of Algeria. Do be warned, however, that the population track (used to display the political leanings of each region) does get rather overcrowded with counters, which can slow gameplay and result in pile-toppling mishaps. The publishers provide an alternative off-map sheet on their website, and we’ve also designed one here.

Players receive a certain number of operations points each turn, influenced in part by political conditions (such as the degree of government crisis in France, or the number of regions under FLN control). These are then used to recruit or upgrade FLN units, deploy French reinforcements, engage in various guerilla activities (attacking the structures of French governance and intimidating the locals, propagandizing, organizing covert cells, assassinating pro-French figures) or  counterinsurgency operations (purging FLN cells, promoting pro-French elements, infiltrating and engaging in disinformation, even forcibly resettling the local population). French units may also search for FLN guerillas, and attack them if they can be located. The combat system is straight-forward, as are most other procedures.

Many of these actions have effects on the political leanings of the local population, which are tracked for each region. The game also measures the attitudes of European settlers in Algeria (the pieds-noir), the attitude of the French population, and the degree of government crisis in Paris. Historical events are generated by event chits, with a variety of political and military effects. France wins the game if it can win military control over all of Algeria or by winning a final referendum on independence. The FLN can also win via referendum, or by spurring complete  political collapse in France.

Overall, the game works very well indeed. The rules are clear (although in a few cases I might have renamed certain categories for clarity), and the map and graphics are very good. The combat system is straight forward, and enhanced by a system of tactical choices that while little more than a rock-paper-scissors process that modifies basic combat die-rolls, nonetheless adds to the sense of immersion. I loved the system the designer adopted for breaking up the FLN’s political cells, which uses a little pyramidal display of the cell in question and a series of die-roll interrogations. While this could have been reduced to a single die roll, we found that the sequence used in the game gave a much better feel for the real-world process. My opponent, I must say, was very General Massu in her routine use of torture during interrogations!

One aspect of the game I wasn’t completely satisfied with was the use of events chits. Chits are partly pre-chosen by players, and partly random. This has the effect of making your initial “choice” of future events an important part of your game strategy—even though some of the events (such as the discovery of oil) were historically generated by forces outside the actors’ immediate strategic control. I would have preferred if most of these events had been fully randomized, perhaps reduced somewhat in effect, and possibly had some counter-factuals thrown into the potential counter mix too. Alternatively, an international dimension could be introduced whereby the orientation of external actors are affected by the diplomatic and political actions of the competing sides. This, however, is a minor quibble.

Another quibble was the treatment of towns in the game. While the major cities (which acted like regions in and of themselves) were straight-forward enough, the found the smaller urban areas seemed rather an after-thought. Again, however, this was only a minor issue,

Ici, c’est la France is a rich, detailed, and accurate portrayal of the events in Algeria between 1958 and 1962. It gives a good sense of the dynamics of insurgency, and especially of its anti-colonial variety where opinion in the colonial métropole was always an important determinant of colonial staying-power.

It is also a lengthy game (if you play the full version), and much more complex than the average non-wargamer usually experiences. While my opponent mastered it quickly, she’s a rather fast learner and I’m not at all confident the average group of students, or most professionals, could match that. Sadly, this sharply limits the potential value of the game in an educational or training setting. In full term courses with bright students one could, perhaps, assign it as a fairly major assignment, much as one would a book review—or even require that students play through it in conjunction with reading a book like Alistair Horne’s classic Savage War of Peace. Be prepared for a lot of confused rules questions from gaming newbies, however. It is also an open question whether, for the time and effort put in, they would necessarily learn more than from a regular research paper assignment.

As noted above, the “mini-game” of purging FLN cells is clever, and almost cries out to be expanded into a much bigger game of counterterrorism/counterintelligence. While not necessarily unique or path-breaking, the systems for  political attitude tracking and most of the insurgent and counter-insurgent actions could also provide inspiration for other insurgency games. The overall game system could easily be mapped on to, say, the war in Afghanistan–indeed, I can already imagine the “General McChrystal speaks to Rolling Stone” event chit!

I would have one caution in adapting this overall game system for other conflicts, however. The Algerian war was characterized by FLN suppression (or forced integration) of most other nationalist forces—in contrast with those cases where there may be multiple semi-cooperative, semi-competitive insurgent actors, possibly vying for the support from the same constituents. This didn’t mean the FLN was always united. On the contrary, there were schisms and purges both before and after independence. Still, it certainly was less complicated in this regard than, say, the Palestinians, Iraq, Afghanistan, Somalia, or DR Congo.

Ici, c’est la France is both an excellent game and a very good simulation. While the level of detail, complexity, and required time commitment it involves will preclude most instructional use, those interested in the dynamics of anti-colonial insurgency will find it well worth playing. 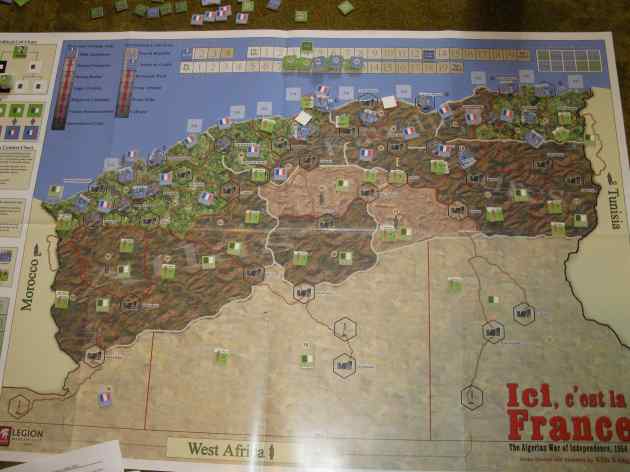