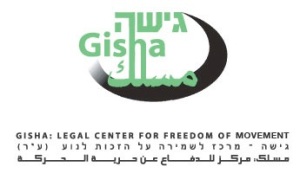 The Israeli NGO Gisha has released a new flash-based game, “Safe Passage,” which is designed to highlight some of the rather Kafkaesque residency regulations in the occupied Palestinian territories. According to their press release:

Gisha – Legal Center for Freedom of Movement today launched the first computer game of its kind in Israel: “Safe Passage” allows the user to experience interactively the restrictions on movement between the Gaza Strip and the West Bank through innovative use of animation, flash documents, video clips and a blog. The game includes an archive of dozens of legal documents that shed light on military legislation and legal rulings since the 1990s, when Israel began imposing increasing restrictions on movement between the two parts of the territory.

Users can play the role of one of three characters– a student, a businessman and a family man – trying to reach their chosen destinations. When the player enters the role of the student, she will be asked to try to convince a military mailbox to examine her request to study using a flying hat, whereas the family man finds himself sitting one moment on a bench outside his home in the West Bank and in the next being catapulted to the Gaza Strip because of a magic key. The businessman, meanwhile, contends with giant coins threatening to prevent him from manufacturing and selling ice cream, driving him to seek creative solutions on land and in the air.

According to the animator, Gilad Baker: “We faced a challenge – how to make military documents accessible to the public. Our solution was to integrate them into the personal stories of real people in the Gaza Strip and West Bank, to help people understand the policy”. 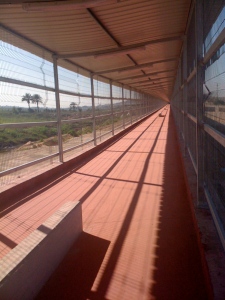 Passages falls into the category of web-based advocacy games, of the sort we’ve highlighted before on PaxSims. It’s not much of a game, of course, since no matter what options you select you won’t be able to leave Gaza—much like the real situation, which is the entire point. The idea of a “game” is being used here as a baited conceptual hook to draw attention to an issue, in the hopes that the player/reader will then be motivated to learn more, and ultimately be mobilized around the featured cause. In this regard, the site is quite well done, with links to actual military orders and legal texts, as well as profiles of the real people behind the animated characters. I did wonder whether some of the abstraction and metaphor in the graphics might confuse those who aren’t already familiar with the situation, but since the project is aimed in large part at an Israeli audience this presumably will be less of a problem.

Picture at above right: Erez Crossing, from my last trip to Gaza in January. h/t to Nigel Roberts for passing on the game link.