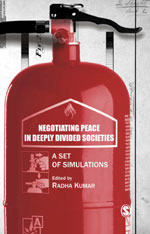 This book contains a series of six ready-made simulations, each of which addresses issues of peacemaking in politically of ethnically-divided societies.  Four of these address current or recent conflicts: the Good Friday Agreement in Northern Ireland, a hypothetical constitutional renegotiation in Bosnia-Herzogovina; hypothetical civil society negotiations surrounding the ethno-tribal conflict in the Nagaland region of India; and prenegotiations related to the Kashmir conflict. Two others deal with fictional settings: peace negotiations amid a stalemated secssionist civil war in  the Asian country of “Aboltabol,” and a meeting of the international community to discuss possible humanitarian intervention in  the war- and famine plagued African country of “Samia.” In each case, the book provides an overview of the conflict, information on the key actors represented and their respective interests and positions, a timeline, and relevant background documents (including, where appropriate maps).

While most of the simulations presume open-round-table discussion, many also suggest staging the simulation in particular ways so as to mirror the dynamics of the conflict or particular negotiations. The Northern Ireland simulation, for example, calls for both plenary and working group meetings, and makes concrete suggestions as to the seating and relative size of delegations. The Aboltabol simulation, on the other hand proposes that actors be assigned to one of five separate physical locations (such as the federal capital or the outskirts of the regional capital), with a negotiator shuttling between these. These procedural issues are much more than mere atmospherics: in the real world, as in a simulation setting, they are often themselves the subject of intense bargaining precisely because they can shape both negotiating dynamics and outcomes.

According to the Radha Kumar’s introduction to Negotiating Peace in Deeply Divided Societies, some 42 trial runs of the simulations were undertaken across several Indian universities. Certainly the chapters are well-written and clear, and the background materials would serve very well as the core briefing documents for participants (ideally, supplemented by some additional research).  Most of the simulations are written by regional experts with a rich understanding of local history, actors, and the conflict itself.

What is missing from this interesting collection, however, is solid guidance for neophyte simulation moderators. The editor’s introduction does little more than summarize the simulations that follow. The appendix “Note for Simulation Setters” is a disappointing half page long. It emphasizes the importance of briefs and debriefs (but says nothing about how to do this), suggests that students should undertake a minimum of four simulations (although one can easily imagine instructional settings in which a single simulation would be a more optimal use of scarce instructional time), and (wisely) suggests that instructors show flexibility in adapting the simulations to their particular needs. The book certainly would have been strengthened by a full-length chapter discussing the various ways in which the simulations could be staged, and the participant, staff, time, and resource demands of these; approaches to briefing and debriefing; modes of communication (including in person and electronic means); potential challenges or difficulties, and how to overcome these; approaches to course integration; and other useful issues.

In all six cases the simulations take the form of role-play exercises, in which participants are largely constrained only by their understanding of their briefing notes. There are, therefore, no material resources to be allocated, and no opportunity costs arising from such decisions. While this is not likely to be a problem in the more historical, political negotiations (such as the Good Friday Agreement or Bosnian constitutional renegotiations), it might well lead to problems in the abstract Samia humanitarian intervention simulation (How many troops do I have? How much money? Can I spend a billion dollars?). Indeed, this latter simulation seemed the one problematic chapter in the book, since it seems to be asking students questions (for example, how many troops will be needed to stabilize humanitarian conditions) that will not be answerable on the basis of either the information in the text or their own research and background knowledge. Overall, the military/security and especially development/economic dimensions of peacebuilding are less well covered than the political/diplomatic/constitutional aspects in all of the cases, although one could perhaps supplement these simulations with additional materials to more fully address these dimensions.

Despite this shortcoming, this book is nonetheless a valuable contribution. It will be especially useful to instructors seeking ready-made conflict resolution simulations for the classroom. Negotiating Peace in Deeply Divided Societies also provides a useful model for how simulations can be presented, with the models offered in the volume providing useful templates that could be applied to writing up simulation materials for other cases.

(While on the subject, another useful source of similar negotiation exercises is available online from the Public and International Law Group.)