Launched last year, the United Nations’ International Strategy for Disaster Reduction (UN ISDR) have produced excellent online game about disaster preparedness and planning that is both informative and fun to play: Stop Disasters!

In the game, players choose one of five scenarios, each set in a different region and built around a different disaster risk: tsunami, hurricane, wildfires, earthquake, and flood. They select a degree of difficulty, are given a set budget, and then try to prepare the local community for the inevitable disaster. A variety of actions are available, depending on the case chosen. In the tsunami scenario, for example, the player can replant vegetation, build various natural and artificial surf barriers, upgrade, demolish, and construct housing and hotels (preferably in safer locations), build public infrastructure, and deploy early warning technologies and training. As you do so, information windows tell you not only about the technique you’ve chosen, but its relative cost, effectiveness, and limitations. When you’ve run out of time or budget, the disaster strikes, unfolding on your screen and generating a report on human and material losses. (Full disclosure: I lost 136 people to my first tsunami, and 48 to the second). The interface works well, and even without reading all the instructions–a bad habit of mine–it is easy to work out how it all works.

UN ISDR’s efforts seem modeled after the great success of the World Food Programme’s earlier Food Force online game. Although Stop Disasters! appears not to have garnered the number of online players and volume of press coverage that the WFP’s effort did, it is certainly at least as informative. It is also much more playable—whereas Food Force rather led you to a single optimal solution in most cases, Stop Disasters! has many, many more possible mitigation strategies. 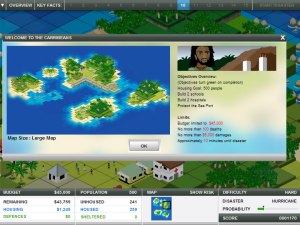 From an educational perspective, the simulation highlights nicely that “natural disasters” are far from natural at all, and arise in large part from the ways in which human societies and their built structures interact with (and change) the natural environment. This, coupled with population growth and poverty, creates new vulnerabilities such as low quality housing constructed in vulnerable areas. The simulation also points to, but doesn’t really simulate, some of the trade-offs and tensions between risk reduction measures and economic interests: wide open beaches are popular with the tourists, for example, but increase the risk of inland flooding compared to sand dunes and vegetation. The website includes extensive links to fact sheets, further information, resources for K-12 teachers and other useful materials. It is all very, very nicely done.

Of course, the simulation also simplifies for its audience, as simulations always do. As is often the case, the player is all-powerful, demolishing the (unsafe) dwellings of the locals and building new ones on safer ground with scant regard for the views of their inhabitants, of the landowners, or of the local authorities. (It does, in fairness, note that real-life construction requires local planning permission, but it does miss a chance to highlight the importance of local support, stakeholder consultation, host community and country ownership of the process, and so forth.) There are no powerful local economic interests in Stop Disaster! to prevent you from planting trees on a tourist beach, or opposing costly building upgrades. Local construction codes, once you’ve demanded upgrades, appear to be scrupulously implemented—no contractor short-cuts, sub-standard materials, or corrupt building inspectors here! However, used in an instructional setting (generally high school or even introductory development courses in university) these are all issues that can be discussed, with even the simulation’s limits providing a range of additional potential teaching opportunities if properly handled by a course instructor. Indeed, I’ll likely be using the simulation as the basis for small group discussion for the module on disaster vulnerability in my own development courses.

Finally, I’ll throw out a challenge to the PaxSims readership: play the game and post your high scores in the comments section here, with the winner to be highlighted in a future PaxSims post. Go to it, would-be international disaster-reducers!